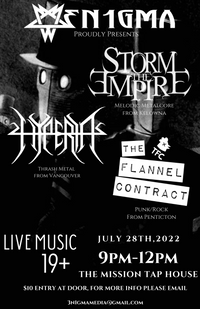 Thursday July 28th, 3N1GMA is Proud to present: STORM THE EMPIRE, HYPERIA & THE FLANNEL CONTRACT LIVE! Storm the Empire hits the stage with High Energy Vancouver based Thrash band HYPERIA and Penticton's Rockers of Punk The Flannel Contract! Get yourself set for a night of amazing music and good memories! This is a show you do not want to miss! Show starts at 9 $10 at the door The Mission Tap House

STORM THE EMPIRE is a Melodic Metalcore band from Kelowna, BC. Comprised of Robb O'Day (Rhythm Guitar/Lead Vocals) James Schultz (Lead Guitar), Norm Mathers (Bass and Backing Vocals), and Andy Ashley (Drums). By harnessing influence from past metal masters and contemporary heavyweights, like While She Sleeps, Gojira, Karnivool, We Came As Romans, Fit For A King. STORM THE EMPIRE produce music that is aggressive, formidable, and compelling. With the use of strong melodies and talented musicianship, the industrious quintet locked themselves down during the pandemic and released their second official release and self produced EP, “Within Chaos, There's Beauty” on Florida based Kingside records in Sep 2021. After some personnel changes and retooling the band is now currently working on their new album “Born of Embers”, and they are set release their new single “Into the Dirt” summer of 2022.

HYPERIA (originally from Calgary, AB now based in Vancouver, BC) is a Melodic Thrash Metal band known for their wailing vocals, shredding guitars, and fast, heavy music. In April 2019, HYPERIA announced their signing SLIPTRICK RECORDS, who released their debut full-length album “INSANITORIUM” in January 2020. Later that year, the band announced the departure of their previous drummer Jordan Maguire, while at the same time revealing the commencement of their second record “SILHOUETTES OF HORROR” with session drummer Gord Alexander (Tessitura, Tides of Kharon, Immunize). The album was completed in June 2021 and released in March 2022.

With a Unique spice of Punk, The Flannel Contract hails from Penticton, British Columbia. The Funky 3 piece has created a solid buzz around the music and performance they've created.