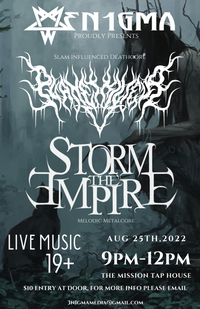 August 25, 3N1GMA is Proud to Preset: PLANETKILLER & STORM THE EMPIRE LIVE! Catch PlanetKiller and Storm the Empire LIVE as they lay down some of the Heaviest Guitar Riffs and get the Crowd Moving the way it should be!

PlanetKiller: https://www.facebook.com/planetkillerbc Slam influenced Deathcore band from Kelowna BC. The Treachery ascending from the depths, has determined that you are Fraudulent. They find this unacceptable and will soon unleash Violence upon the world.

Storm the Empire: https://www.facebook.com/StormTheEmpire STORM THE EMPIRE is a Melodic Metalcore band from Kelowna, BC. Comprised of Robb O'Day (Rhythm Guitar/Lead Vocals) James Schultz (Lead Guitar), Norm Mathers (Bass and Backing Vocals), and Andy Ashley (Drums). By harnessing influence from past metal masters and contemporary heavyweights, like While She Sleeps, Gojira, Karnivool, We Came As Romans, Fit For A King. STORM THE EMPIRE produce music that is aggressive, formidable, and compelling. With the use of strong melodies and talented musicianship, the industrious quintet locked themselves down during the pandemic and released their second official release and self produced EP, “Within Chaos, There's Beauty” on Florida based Kingside records in Sep 2021. After some personnel changes and retooling the band is now currently working on their new album “Born of Embers”, and they are set release their new single “Into the Dirt” summer of 2022.